We have added many artists to our growing library of anti-Trump protest music! As you may already know, all songs can be found at www.trumpedbymusic.com/music. We would greatly appreciate it if you can take moment to watch, listen and share.

You will find parodies of the presidential family and of course Donald Trump himself, and country songs addressing our continued collective sadness over 2016’s election outcome (some wounds never heal).

Dorothy Bishop
“Melania Trump” explains why she wont hold Donald’s hand; A word from “Dr. Birx” re: Clorox; Karen wont wear a mask; A special quarantine message from “Stevie Nicks”. Dorothy is known for her off Broadway show “Spamilton!” and has numerous parodies on her YouTube page.

Michael & Teri Conn
Rise Up – Dissent is Patriotic; What’s It Gonna Take? “We were so depressed after the 2016 election that we decided to write a song about where we saw our country heading with this new presidency. So many people didn’t vote that we want people to know their vote counts. It’s the most powerful protest we have. Rise up and vote him out!” – Michael & Teri

A motivation now more relevant than ever!

Lauren Mayer has been writing songs weekly since 2012. “As you may imagine, since 2016 a good portion of them have been about Trump. I have dozens that would be right for TRUMPED BY MUSIC but I don’t want to overwhelm you.” – Lauren Mayer

Take a look at the selection Lauren made for us and let us know if you want more!

Judy says, “A lifelong lover of musical theater, I have loved many melodies by Rodgers and Hart. This one, in particular, compelled me to re-write it with words that are relevant to the person who is currently in the White House, as my first political parody.”

Sandy tells us that the motivation for both these “list songs” was feeling the need to record for posterity the ever-growing list of atrocities Trump commits at a rate that makes it hard to keep up.

We hope you enjoy browsing our expanded library anti-Trump protest songs. And of course you can expect more in the near future! We are overwhelmed by all of the responses and positive encouragement we’ve received from our backers and musicians! Our Kickstarter campaign is almost over, but that won’t stop us from continuing to profile artists and growing the library right up until November 3!

Please don’t hesitate to reach out to the artists on their YouTube page and give them some positive encouragement and help spread the word! Raise your voice and wear the T-shirt! #trumpedbymusic 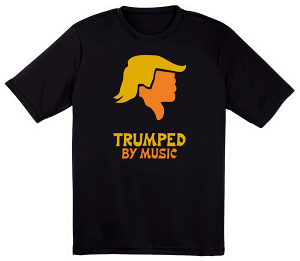 The TRUMPED BY MUSIC Team
Frank, David, Pippi and Camiel